The structure of fixed income markets has changed dramatically over the past decade. New regulations, government bond purchase programs, new products such as ETFs, the emergence of electronic all-to-all platforms and non-dealer liquidity providers using algorithmic and high frequency trading are among the developments re-shaping the industry.

A 40-year bull market in bonds has seen US 10-year Treasury yields fall from almost 16% to less than 1% and in major European markets 10-year rates are negative. At the same time, spreads on investment grade and high-yield bonds are historically tight. These low rates and tight credit spreads are expected to persist for years.

Investors searching for higher yields in this low-rate environment have been moving into lower-rated investment grade, emerging market and high yield bonds. But this introduces increased credit and liquidity risk and reduces diversification benefits as these lower-rated securities are more highly correlated with equities.

In this new landscape, electronic trading and the use of AI for trade automation have become the new standard. They are used by both the buy-side and sell-side and are a prerequisite for remaining competitive.

The increased electronification of the markets has also created more useable and accessible trade data. This increase in both real-time and historical transaction data has made it possible to aggregate large amounts of data for each client at a time that can be used for analysis by AI tools. This new generation of AI is being used to perform sophisticated relative value analysis including enhanced rich-cheap analysis.

Reflecting these changes in the market, buy-side fixed-income desks are spending heavily on technology and increasing their use of AI for analytics and automated trading. Greenwich Associates reports that buy-side fixed-income trading desks allocate 41%4 of their total budget to technology, and in January 2020, 61%5 of fixed income market participants surveyed by Greenwich said they were either using AI or planned to in the next 24 months.

Investors are increasingly turning to quant trading in fixed income to increase alpha. Bloomberg, citing data from Man Group, reports that long credit positions held by quants have doubled since 2018 - reaching about $23 billion6. In recent years firms such as Blackrock, Blackstone and AQR have started quant trading of fixed income.

Quantative hedge funds have been moving into the fixed income space. They’re adding alpha and enhanced beta using strategies that isolate factors such as carry, momentum, quality and volatility and by applying quant modelling to directional, yield curve and rich-cheap analysis.

Overbond has harnessed AI and the wealth of new transaction information to bring quantitative trading to buy-side desks through an enhanced rich-cheap model. Combining both static and dynamic analysis of multiple factors, this new model provides insight well beyond the traditional analysis and is more powerful than what can be created through traditional spreadsheet methods.

With the Overbond suite, buy-side desks around the globe can generate systematic return with a real-time, fully back-tested, proven and transparent methodology that is scalable and interoperable.

The RCM was tested on a rich-cheap trading strategy (RCS). Using pre-defined qualitative and quantitative criteria, a pair of bonds is selected from a sub-universe of bonds. This pair is a potential target for a long/short strategy in which an investor would buy/sell the respective cheap/rich bond pair to get market neutral exposure to idiosyncratic risk. The goal is to exit both positions at a profit after a mean reversion to market fair value.

The rich-cheap strategy is designed so that the likelihood of positive alpha is greater when both traded pair constituents are at or near their 30-day extremes.

To demonstrate Overbond’s rich-cheap analysis, the fixed income issues of Allstate and MetLife are analyzed. The analysis begins with an examination of the fixed income summary screens (figure 1) and then the rich- cheap interquartile for the issuers (figure 2).

Figure 1. Fixed income issue summary for Allstate and MetLife as shown on the Overbond platform

Figure 2. Rich-cheap metrics for the individual bonds as shown on the Overbond platform 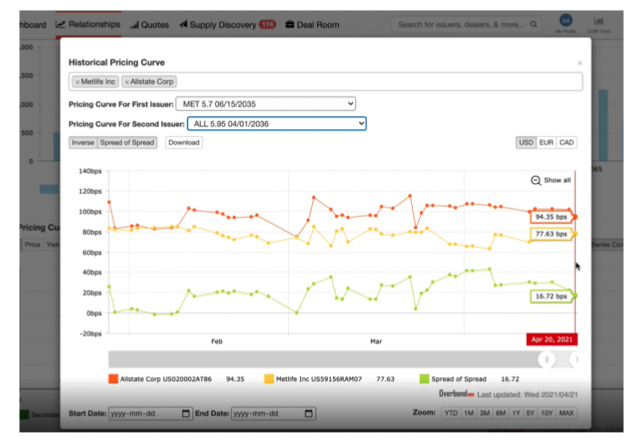 Figure 3. Historical bond pricing curves for Allstate and MetLife and their yield spread as shown on the Overbond platform

Next, the relative value of one bond versus another is examined using historical pricing curves and the spread between them (figure 3).


A single rich/cheap calculation and score allows an investor to isolate one pair of tradable bonds. The Overbond algorithm allows investors to analyze pairs of bonds that may fit their portfolio composition. The algorithm has been trained to simultaneously find many alpha generating opportunities in the market.

With the Overbond suite, buy-side desks around the globe can generate systematic return with a real-time, fully back-tested, proven and transparent methodology that is scalable and interoperable. Trade ideas require at least one value metric such as the spread in yield-to-maturity (YTM) between two fixed income securities as measured in basis points (bps).


In fixed income “pairs” trading, investors hope to benefit from a tightening, or narrowing, of the yield spread following trade execution. In the above example a tightening would occur if the spread of B over A was to move from +15 bps to a smaller spread such as +5 bps.

Because yield and price are inversely related, a tightening implies a positive return, while a widening implies a loss. Other value metrics that might be used include the price spread, spread of z-spreads, OAS spread, and cost of carry spreads.

Static valuation based on COBI actual vs fitted differentials

The primary metric used for the rich-cheap strategy is the spread between the COBI- generated individual ISIN (COBI) spread and the COBI-generated fitted secondary market curve (SMC) spreads i.e., blue dots vs green fitted curve on our COBI pricing page.

Example - Bond A vs. Bond B

Figure 4. COBI and secondary market spread curves for Bond A

Figure 5. COBI and secondary market spread curves for Bond B

The previous static valuation analysis can be supplemented with a dynamic analysis by comparing the current spread differential between the COBI spread and the SMC spread for target sale and purchase bonds over time.

The % IQR is simply a measure of where the current value is compared to its 30-day history, expressed as a percentage.

On a 30-day historical basis, Bond X is “rich” while Bond Y is “cheap”

This produces a subset of trading opportunities for follow-up filtering. This tiering of the tests eliminates unnecessary calculations.

The exit target is set as entry level minus three standard deviations.

The exit target is set at the time of trade execution. Only subsequent changes in the actual spread of spreads are relevant, not how the moving average moves higher or lower over time or how the Bollinger Bands widen or narrow.

he actual basis point volatility of prospective trades is calculated for two reasons:

It is important to establish the cost of carry on the overall pairs trade.

Positive carry adds to the overall value of the trade over time while negative carry subtracts from it.

Positive carry is generally more desirable, but it should not be the sole determinant.

The strategy assumes that a pair of bonds will be held for an average period of 30 days following a customizable trade signal. Given a rich and cheap bond, a trading pair is defined. A pair is valid (tradable) if it respects the following quantitative and qualitative requirements:

The parameters used for back-testing were:

As summarized in the following table, the strategy involved the execution of 11 trades covering the period from July 30th, 2020 to March 30th, 2021. It generated an annualized return of 1.65% with a Sharpe ratio of 1.37. The total holding period was 327 days with an average holding period of 30 days. A fixed repo rate of 0.5% and a risk-free rate of 0.8% were assumed. Total capital deployed was 120 Million and the net profit was $1.77 Million. 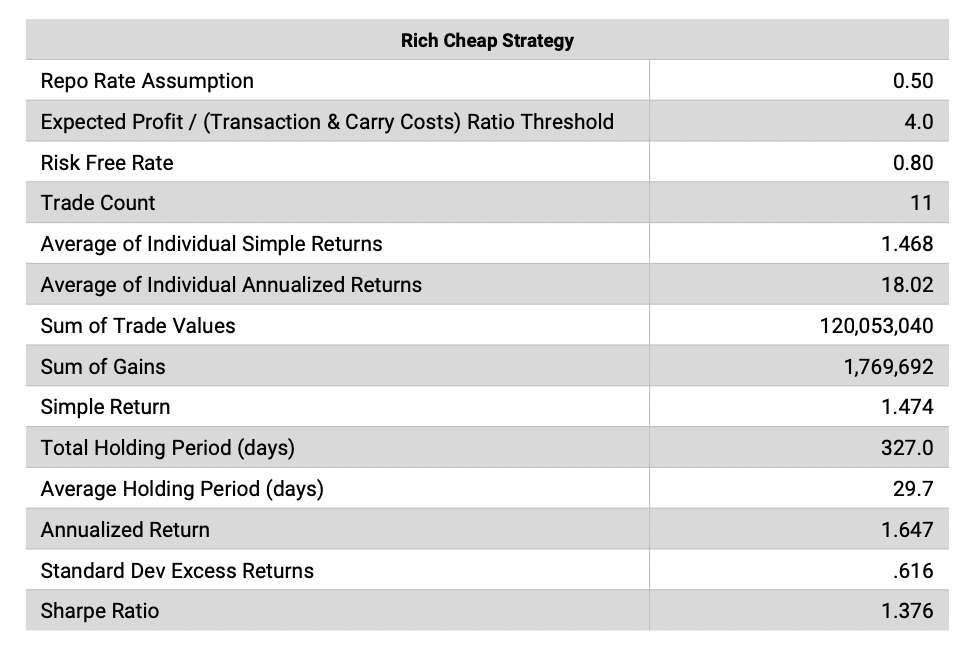 Overbond has created positive business impact for clients around the globe, including top tier buy-side firms representing over $900 billion in assets under management. We work with clients to actively explore the application of new technologies that can serve as the catalyst for trading automation and improved risk management, trade flow and pre-trade and post-trade analytics. 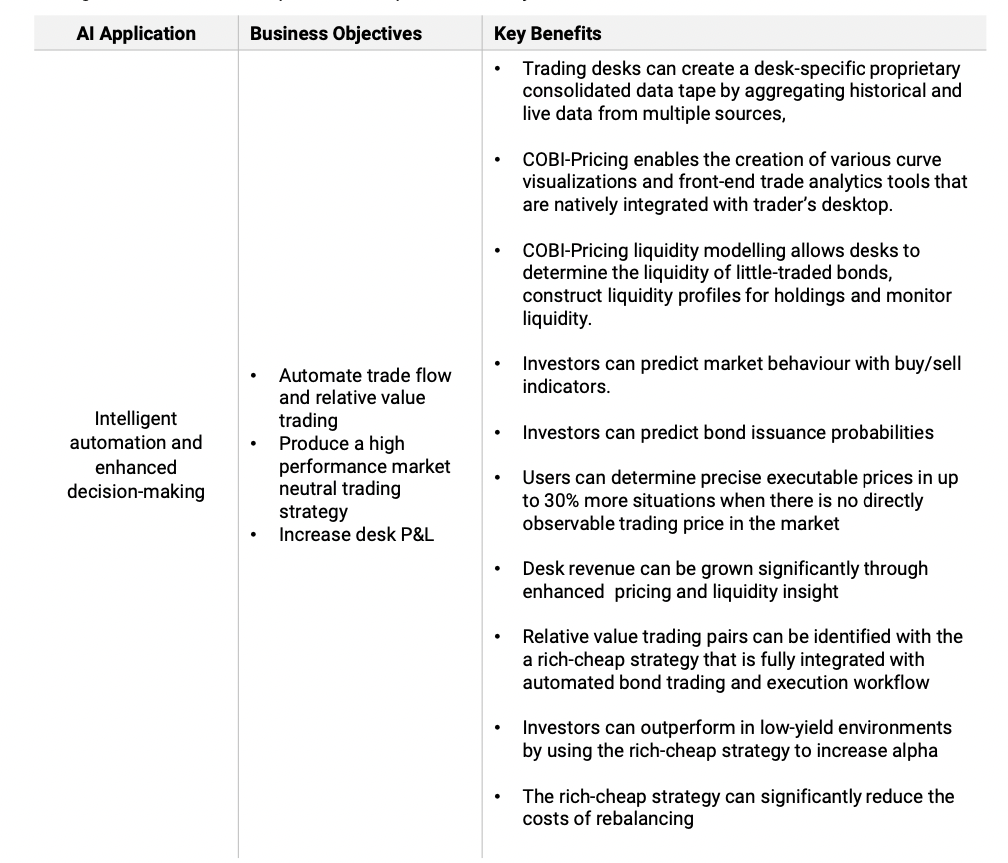 Overbond works with clients to identify and recommend practical AI analytics use cases that are aligned with the strategic goals of the financial institution.

We assess your current AI capabilities and design a roadmap to help you realize value from AI applications. We manage cross-channel data flows across multiple systems and enable custom front-end visualizations.

With our targeted approach and implementation methodology, we quickly demonstrate the value of AI analytics to test use cases. This enables clients to plan and implement change management and facilitates stakeholder buy-in.

Stay in touch with us for market news and more!